Binged watched the entire first season.  It helped.  I have to say, as it ended I'm left with this feeling of I'm sick of endings.  I'm exhausted from being a damn Phoenix.

I want my happily ever after damnit.
Posted by moonwolf233 at 12:41 PM No comments: 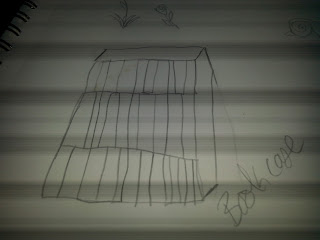 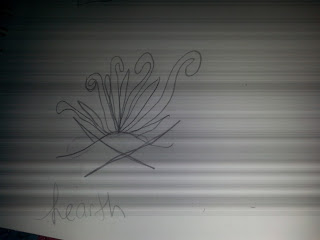 More free motion quilting designs that aren't feathers.  Feel free to use.  I'm using these are symbols of home.

Free motioning can be used in thread magic.
Posted by moonwolf233 at 12:34 PM No comments: 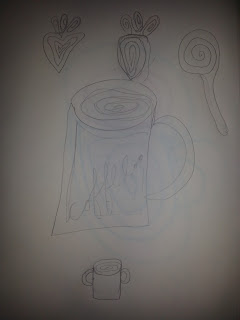 Free motioning quilting motifs, that you can put in quilts.  Strawberries, for prosperity.  Frying pan for home, pot for home, and coffee, or tea cup for home and hearth.
Posted by moonwolf233 at 2:31 PM No comments:

I value helping others.  It doesn't matter their background or their religion.  Actively helping is a value I think is imp.  Passively hoping/praying is not something I think is just enough.  Sometimes it's all you can do, but if you can do more, I think you should.

What I have run into in the Neo Pagan community is different.  The thought that, this might be their life lesson, so lets not intervene, annoys the hell outta me.  It comes from Wicca and the notion that one must ask permission before doing spellwork of any kind.  The theory being, that if the Gods want them to experience this, they will smite the person doing the spellwork, if the permission is asked, the smiting goes on the requester.

That's fear.  I do not value it.  I daresay, I equate it to a type of cowardice.  While there may be good advice to ask permission before doing spellwork, the passivity should not rule every type of work or help you may do for someone.
Posted by moonwolf233 at 2:25 PM No comments:

This is why I'm an eclectic Pagan.  Certain things annoy me, or make me feel argumentative and poke holes and go Yeah butt.  sigh.  I'm also a modern American.  My values are shaped by many ethics and a decent understanding of Psychology.

I like Will Wheatons Don't be a Dick and The Greens think of people complexly and try to be awesome.  I think Germanic values are important, but so are the Christian and some tribal Native American values, and hell Buddhism has some decent points as well.

Wyrd is the fate we wrought by our own actions.  Or the basic understanding of Karma.  Orlog is what is wrought by our ancestors.  http://www.englishfolkchurch.com/Lorehoard/wyrd.htm

Or as it was put at the Heathen discussion:  Wyrd is what we do, it's our actions and deeds.  Orlog is what we were born into.  You can't change being born in middle ages Africa to the year 300 Alaska.  Is it bad that Doctor Who popped into my mind as a loophole argument?

Another example:  Germans were a Tribal folk.  You didn't really leave the area you were born into(well Viking Raiders did and merchants but anyway...).  Think small town mentality.  If you were born into a family that is known for thieves, is the town going to expect you to be any better.

Makes growly face.  The discussion isn't wrong, and while it can be debated, see the englishfolkchurch link, I can't say the understanding is wrong.  I just don't like the concept of Orlog.  I don't like the philosophy. Take that far enough and you get the Indian undesirables.

It annoys me, because it is used to Discern whether someone is fit to join a tribe.  That is their right.  I just have known many broken people, I have been a broken person.  People didn't shy away from me, but lifted me up(many of them Christian) and helped me see why I was doing what I was doing.  They didn't worry whether doing so, would impact their wyrd and whether it would make things go funky.


My mom taught me another concept.  Don't judge a book by it's cover.  I think that's a better concept to live by, instead of someones wyrd or orlog, before accepting someone into my circle of friends.  It has proven to be true.  Those that come from "good" families have just as much dysfunctional crap as those that come from poorer circumstances.

My point is Orlog bugs the shit out of me.  I didn't really figure out why, until watching a documentary on the kids of people in prison who killed.  There are so many reasons why people do something.  There is no reason in today's America and with our modern understanding of psychology to go back to shitty concepts.  People shouldn't have to pay for what their ancestors did, or their parents did.  It's bad simplistic thinking to think that people, who were born to thieves will automatically be thieves.  Not counting the fact that there are probably pretty darn good reasons that family may be thieves.  Poverty makes you do many things.

Then there is the wonderful, but if you come from struggling circumstances but make something good of yourself, what a story to tell.  Screw that.  Lift someone up.  You see someone struggling, no matter if they are in your tribe or not, don't be a dick and get off your tuckus and lend a damn hand.  I know it may be a very Jewish value, though actually it is a German value(probably inspired by Christianity) to get off your ass and and help you neighbor, but hell it makes life a lot easier to live, and favors are usually returned.  AKA pay it the hell forward.

UPG about owls and Cernunnos and fall foliage

Been watching this you tube art scene.  While it inspires me to try something similar, within my talents using acrylics, this one in particular hit me.https://www.youtube.com/watch?v=qhdqW1UBilY

I see Cernunnos at the bottom of the tree.  The Fall foliage is part of my vision.  The owl in this painting is feminine though.  She is her own person but with him.  I get a fey component, due to visions of David Bowies Labyrinth in my head.

I think I ran into her before, when I was young.  I think she's the next stanza of the poem, Lady of the Night.

Seems to tie in with this post
http://paininthebum.blogspot.com/2015/04/celts-cauldrons-and-grail-and-old-dream.html
Posted by moonwolf233 at 10:07 AM No comments:

My Sigyn spoonflower design
http://www.spoonflower.com/designs/4526246
Posted by moonwolf233 at 12:56 PM No comments:

moonwolf233
Been poked for a while to write, but haven't as others say it better. Been getting poked harder so finally am doing what I was told:) This blog will be a work in progress. I want it to be original.